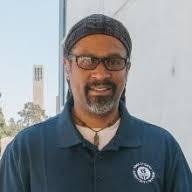 Originally from San Francisco, California, I attended UC Santa Barbara as an undergraduate, majoring in Black Studies and Political Science. During that time, I involved myself deeply in student and community activism and campus politics participating in the Black Students Union (BSU), the 100 Black Men (now called BPRO), Blackwatch, Praxis, Concerned Students, the Student Commission on Racial Equality and other student organizations. I was a member of the Educational Opportunity Program (EOP) and worked as a Peer Mentor. I also was elected to leadership positions within the UCSB Associated Students (AS -student government), first as a member of the AS Legislative Council (now Senate), then AS President and lastly AS External Vice President for State-wideAffairs. I spent a year teaching high school immediately following my initial tenure at UCSB. Beginning May 1998 through June 1999, I participated in a Pilgrimage retracing the route of the Trans-Atlantic Slave Trade called the "Interfaith Pilgrimage of the Middle Passage." During this thirteen-month sojourn, we visited, learned about, offered prayers and honored the history and legacy of enslaved African peoples, both past and present, by walking from Western Massachusetts to New Orleans, traveling through the Caribbean and returning the energy, prayers and even the earth from African burial grounds in the Americas back to the continent where we traveled from Gambia/Senegal in West Africa to Cape Town South Africa. I began my professional career at UCSB working for the Associated Students, first as the Student Government Advisor and then as the Assistant Director for Community Affairs. During this time, I embarked upon my graduate studies in the Department of Education at UCSB, earning a Masters Degree, and am completing my dissertation which explores the legacy and impact of student activism in a higher education setting. Beginning January 2018, I became the seventh Director of the UCSB Educational Opportunity Program, which very much represented a 'second-homecoming' having been an EOP student and Peer Mentor. What is more, I am one of the founding members of the Black staff support group "ucsbBlack" and serve a number of roles in the community, particularly with community-based and non-profit organizations. I live in Santa Barbara and have two beautiful, head-strong children.